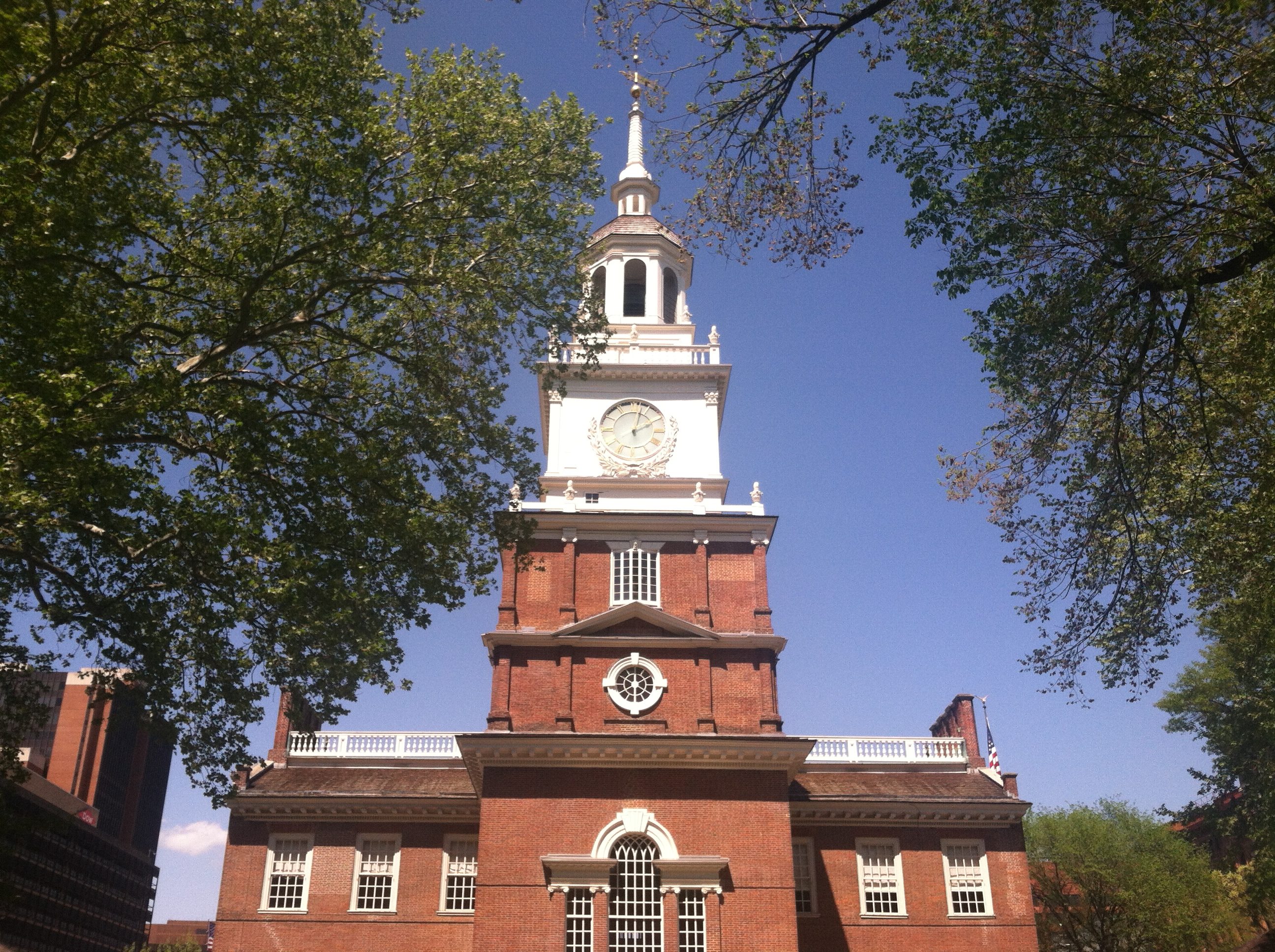 Hours: 9:00-5:00  Tickets can be bought at the Independence Visitor Center

This is it.  Independence Hall is the quintessential Philadelphia landmark, without a doubt.  Everything in historic Philadelphia is centered around this place.  This is a place that every visitor to Philadelphia is essentially obligated to visit.  Because, as we know, the Declaration of Independence was signed here on July 4, 1776.

The landmark building was completed in 1751 as Pennsylvania’s State House, as Philadelphia was the state’s capital during this time.  It is one of the finest examples of Georgian style architecture, which can be seen throughout Old City and Society Hill.  It has red brick facades, two separate wings connected by brick archways.  There is a centrally placed belltower, topped by an iconic steeple added by William Strickland in 1828.  After the signing of the Declaration of Independence and Constitutional Convention, Independence Hall briefly served as a museum owned by Charles Wilson Peale, before being sold to the city in 1818.  It is now one of the essential symbols of the United States.  Abraham Lincoln’s funeral procession in 1865 stopped here, and it is one of the few sites in the United States to be a UNESCO World Heritage Site.

The tour of Independence Hall starts in the East Building, where you are given a rundown of the Declaration of Independence and the Constitution, most of which you probably know by now.  The guides are staff of the National Park Service, which are also present around Independence National Historic Park.  Afterwards, you are led into the building itself through the entrance on Chestnut Street, where the grand foyer divides the building.  The tour continues to a courtroom, where the Supreme Court of Pennsylvania met when this was the State House.    The early Judicial System is explained in depth, as well as interesting tidbits about the room and architecture, such as the fact that the courtroom has a fake door.  After this, you are led into the room.

That would be the Assembly Room, where the delegates debated, where the documents were written, revised, reviewed, and signed.  When you stand in that room, you must consider not only that the likes of Washington, Jefferson, Franklin, Adams, Madison, and Hancock were in that room, but also that the United States as a whole was born here.  When you consider everything that has happened to, in, or by the will of the United States, it is awe inspiring to consider that all of it began in this room.  Regardless of your personal view on the United States as a country, it is one of history’s most powerful, and has had a tremendous influence on the rest of the world.  And all of it began in this room.  The Declaration of Independence and the Constitution are among the most important documents in human history.  They resurrected democracy after it had been absent for centuries.  The Declaration showed that colonies of major empires could overthrow their motherlands, which would continue on to other parts of the world.  And it all began here.  Special note should go to the Rising Sun Chair, which George Washington was seated in during the Constitutional Convention.  Benjamin Franklin stated that he was examining the decorative sun on the chair, attempting to see if it was rising or setting.  He likened it to a rising sun rising over a new nation.

After visiting Independence Hall, you can go to the Great Essentials Exhibit, which is a small exhibit with a few items, although they are of great importance.  The inkstand that Jefferson used to write the Declaration is present.  The first printed copy of the Declaration of Independence is also on display here.  Visitors should also visit Congress Hall, where the Legislative Branch met from 1790 to 1800.  The tour of that begins in the House of Representatives, which hasn’t changed much in function since then, and moves to the Senate and the senate offices.  The Senate house is very well decorated, and is actually quite an impressive room.  There are artworks throughout the rooms, including some rather interesting ones, like portraits of Louis XVI and Marie Antoinette.  The offices of public officials can also be viewed, which made this one of the most ornate buildings of colonial Philadelphia.  Also part of the complex is Old City Hall, Philadelphia’s original city hall and the brief home of the U.S Supreme Court.

Free timed tickets are required for entrance.  Reserving a ticket (which you should do) is $1.50.  It is recommended that you purchase your tickets long in advance, especially if you are visiting in the summer.  Tickets for the Fourth of July border on impossible to obtain.  They are also available on a first come, first serve basis at the Independence Visitor Center.  This is highly inadvisable, as tickets can be booked long in advance online.  When you enter, you have to go between Independence Hall and Old City Hall for security, and afterwards you will be lead into Independence Square, where there are fences separating the line from the general public.  It is advised you arrive 45 minutes before your timed tour begins, although you can probably cut it close if needs be.

For the love of God, do not even consider getting tickets the day of your visit, unless you plan on camping out at the Independence Visitor Center overnight.

When in the course of human events… 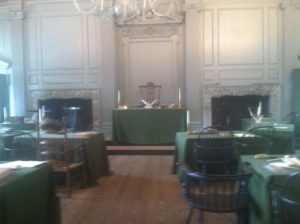