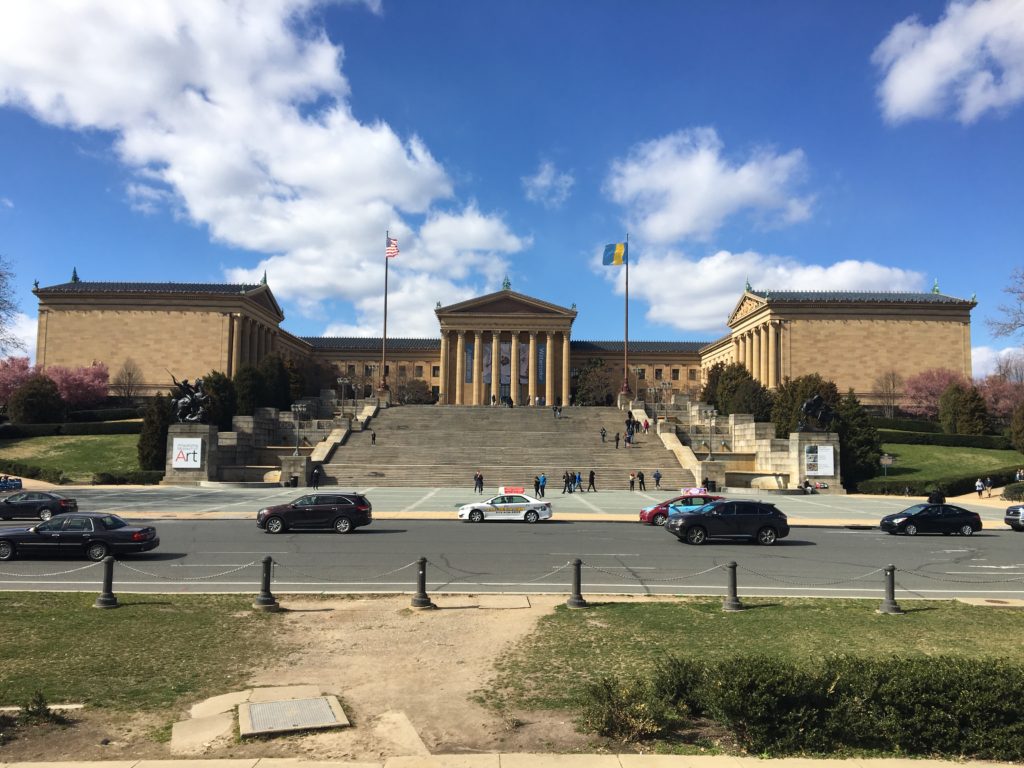 Standing dominantly atop Granite Hill, the Philadelphia Museum of Art is one of America’s greatest art museums.   The monumental Greek Revival building is one of Philadelphia’s most famous buildings, if only for its pop-culture appearances.  It is often referred to as the “Parthenon on the Parkway” for how it looms over the Benjamin Franklin Parkway to the east, and over the Schuylkill River to the west.  From the top of its famous steps, the view of Center City is magnificent.  Upon entering, visitors will be in the Great Stair Hall, with Diana, the Roman goddess of the hunt, standing on top of said stairs.  From there, the various sections of the museum are accessible on either side of this hall on both floors.

The largest section in the museum, European Art 1500-1850 takes up nearly half of the museum’s second floor, and is filled with a variety of paintings, sculptures, and period rooms.  This section contains Ruben’s dramatic Prometheus Bound, as well as The Face of Christ by Rembrandt van Rijn himself.  One other highlight is the Flemish Altarpiece with Scenes of Passion, a remarkable church altar with paintings on the sides and bottom, and extremely intricate miniature sculptures of the Passion of Jesus.  Some of the period rooms include a room from an elite residence on the Ile St Louis, an English drawing room, and drawing room from a turn of the century New York townhouse.  There is also a wide variety of sculptures, including a room with a statue representing a season in each corner.  This section also contains work by El Greco and Veronese.

On the opposite side of the museum is Medieval Art, which is the art of Europe from 1100-1500.  The section is centered around an authentic cloister from a French monastery, complete with a central fountain.  Architecture played a considerable role in the art of the Middle Ages, so there are several other architectural features, including a large Gothic archway.  Off to the side is a French  Gothic chapel, with magnificent stained glass.  The collection itself includes a variety of paintings and sculptures, including a several by Sandro Botticelli.  Fra Angelico’s Dormition of the Virgin is another masterpiece from the early Renaissance.  Jan Van Eyck’s St Francis of Assisi Receiving the Stigmata is a fine example of his unmatched attention to detail, with the most miniscule things included in a small frame.

The Asian Art wing spans the entirety of the continent from the Middle East to Japan.  The most notable part of this wing are the period rooms, including a 5th Century Hindu temple from India.  The South Asian galleries are newly renovated, and include sculptures of gods, animals, and mythical creatures, as well as an impressive Tibetan altar.  China is represented by a reception hall from the 17th Century, as well as the Hall of Wisdom from a Buddhist temple, complete with an extremely elaborate ceiling.  Sculptures, silk paintings, and some beautiful crystals are also in the Chinese section.  Ogi Rodo’s Evanescent Joys is the technical name for what most people call the Japanese teahouse.  This teahouse maintains its original construction and stone walkways, and has a small shrine with a Buddha statue in it.  Modern art from Japan is also displayed, as well as modern Korean art.

Impressionist paintings are displayed in European Art 1850-1900, where names such as Van Gogh, Monet, Degas, Renoir, Cassatt, Pissaro, and Manet are featured.  Van Gogh’s Sunflowers is displayed here, possibly the museum’s most famous painting.  Works by Claude Monet include The Japanese Footbridge, as well as less famous works like Morning Haze and Poplars.  The collection includes Cezanne’s The Large Bathers, Monte Sainte-Victoire, and several of his still life paintings.  The Impressionist paintings themselves are very appealing, done in bright colors with a wide array of subjects, including portraits and seascapes.

Next to the Impressionists is Modern and Contemporary Art, which covers Cubism to the present day.  Picasso’s The Three Musicians is one of several works in the collection.  Salvador Dali’s Premonition of Civil War, the highlight of the Surrealist art at the Museum, is an ominous painting depicting various limbs holding themselves together, all while a grimacing face is above.  The modern section also includes the largest collection of work by Marcel Duchamp, including Fountain, The Large Glass, Nude Descending a Staircase, and the ever-controversial Etant Donnes, which occupies its own room.  Other modern artists include Mondrian and Cy Twombly, who has his own room.  This section of the museum also includes videos and light used as art.

The Art Museum has one of the best collections of American art, including works by Eakins and Peale.  Works by Eakins include The Agnew Clinic, The Last Round, and William Rush Carving his Allegorical Figure of the Schuylkill River.  Some other paintings include Henry Ossawa Tanner’s The Annunciation and Winslow Homer’s The Life Line, which depicts a daring rescue at sea.  Charles Wilson Peale’s The Staircase Group is a popular favorite as well.  A collection of landscapes show the beauty and diversity of America’s natural wonders.  American Art also includes an enormous collection of glasswork, especially that of the Pennsylvania Dutch Country.

On the second floor, there is a small collection of arms and armor, which includes swords, lances, and other weapons from throughout the ages.  The centerpiece is a complete set of a knight’s armor, as well as his horse’s.  The collection is small, but impressive.  The detail put into the carvings on some of the weapons is exquisite.

The Art Museum is also host to many temporary exhibits, many of which are world class.  The main space for temporary exhibits is the Dorrance galleries, accessible through the left hand side of the Great Stair Hall.   There are smaller exhibits in the basement, and the hallways going throughout it, such as those near the cafeteria.  Other temporary works of art can be found scattered throughout the Museum.

The Art Museum also has the Perelman Building, which is across the street from the Main Building in Philadelphia’s Fairmount neighborhood.  This handsome Art Deco edifice is home to the Museum’s collection of textiles and costumes, as well as a library and temporary exhibits.

Of course, the Art Museum’s real claim to fame are the Rocky Stairs, made famous by the classic 1976 boxing film Rocky, which won Best Picture at the Oscars.  The training montage – arguably one of the most iconic scenes in cinema history – ends with Rocky Balboa triumphantly ascending the front stairs of the Philadelphia Museum of Art while Bill Conti’s epic Gonna Fly Now plays.  Today people continue to reenact this famous scene, running up the stairs and jumping victoriously.  A statue of Rocky is placed at the bottom of the stairs, which has become a cultural symbol of Philadelphia.  A special plaque at the top marks the spot where Rocky reaches the top in the movie.

The Art Museum is undertaking a massive and highly controversial renovation.  The Chinese galleries will be closed for refurbishment throughout 2018, and are scheduled to reopen in Spring 2019.  A new museum cafeteria will open in 2018. 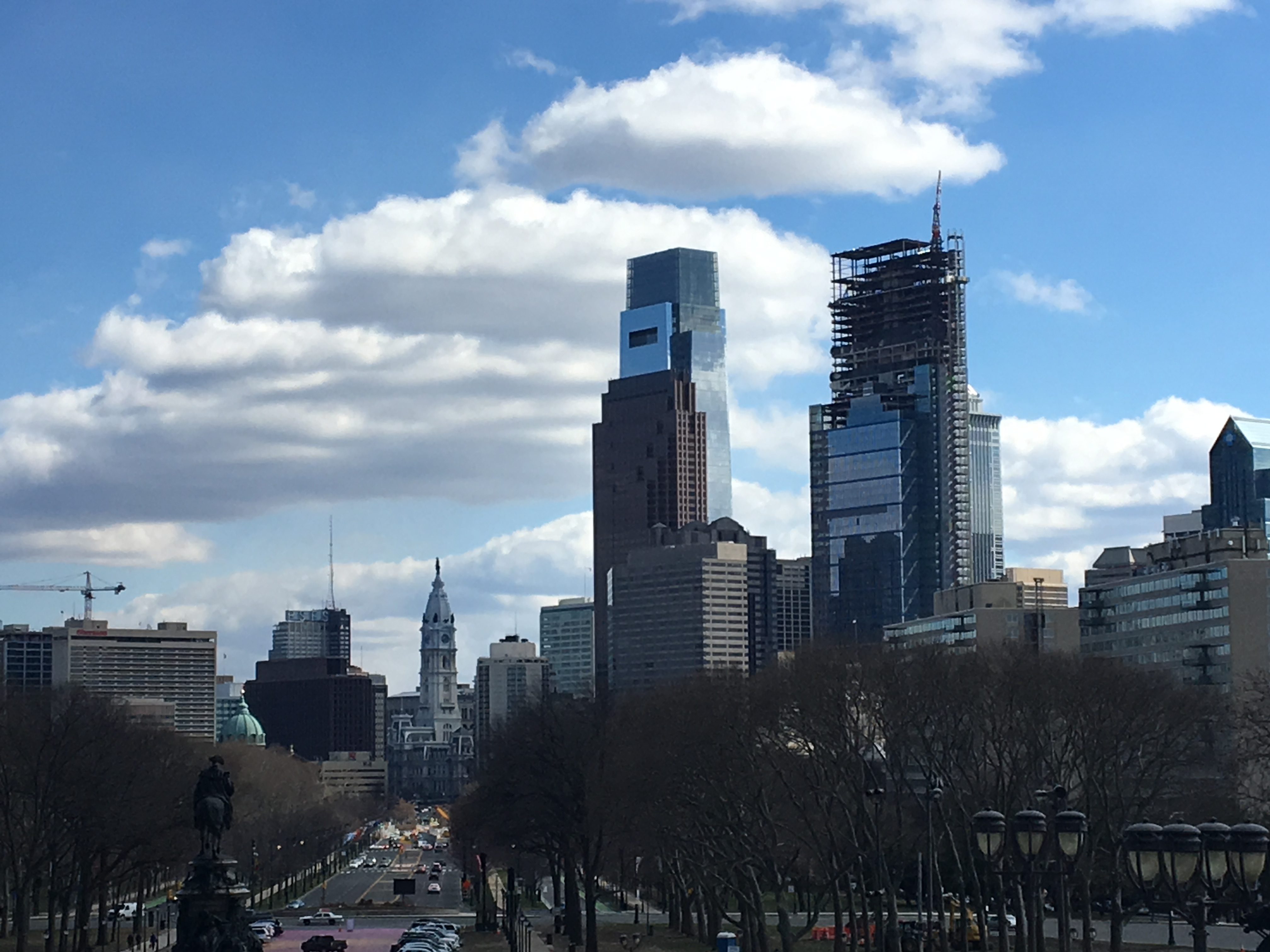