Standing a towering 1,121 feet over Arch Street, the new Comcast Technology Center has been completed as the tallest building in Philadelphia.  It takes the title away from the previous Comcast Center, which was built ten years ago.  Designed by the acclaimed British architect Lord Norman Foster, architect of London’s 30 St. Mary Axe and New York’s Hearst Tower, it is not only Philly’s tallest, but the tallest in the country outside of New York and Chicago.  The building houses, as one would assume given the name, the technology offices for Comcast, the most valuable corporation in Philadelphia.  The upper tier of the building will house a Four Seasons Hotel, relocated from its former location on Logan Square.  The top floor of the building will contain a 5 star restaurant in a large atrium, with panoramic views of the city.

Philadelphia’s collection of skyscrapers is ever-growing.  Upon its completion in 1901, City Hall was the tallest building in the world.  For over 80 years, a gentlemen’s agreement was in place stating that no building could exceed William Penn’s hat.  This was broken in 1987 when One Liberty Place was completed, reaching a height of 945 feet.  In the next few years, Center City experienced a building boom, adding Two Liberty Place (848), Mellon Bank Center (792), Three Logan Square (739), Blue Cross Tower (625), and Commerce Square (572).  Liberty Place’s title was taken in 2008 by the Comcast Center (975 feet), which was the tallest building until Comcast Tech took the role.  Skyscrapers under construction or proposed in the city include the W Hotel (582 or 615, depending on source), The Laurel (599), and SLS International (542).  In University City, the Schuylkill Yards project is a long-term development that includes One Schuylkill Yards, intended to rise 1,095 feet. 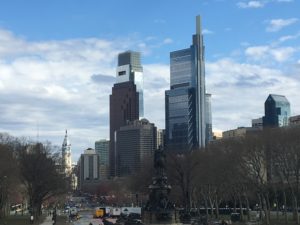 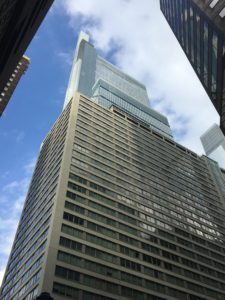 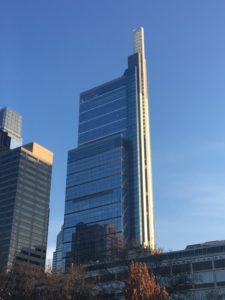